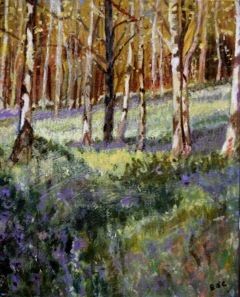 For the past ten years, I have been part of a poetry writers group called Bealtaine Writers. We have been meeting every month in the Irish Writers Centre. We have been in existence for the past almost twenty years, a fine bunch of feisty poets. Many are published and some have in retirement acquired Masters in Creative Writing. All are active writers.

One such woman was Elizabeth O’Carroll who died after a very short illness on Sunday, 10th September. She was perhaps the feistiest of all of us. She was organiser, promoter, convenor, supporter and all round manager of our group. This to the point of being the only one who had the information to keep in touch with all of us.

She was an exquisite poet. Her word pictures of nature and her native Armagh were captivating. Not only that, she was a very fine painter and a superperb gardiner. We used one of her watercolours for the cover of the Bealtaine Writers Anthology. She was tireless in keeping us active, looking out for our interests and minding us like a mother hen. I have personally felt nurtured and minded by her in all the time I was blessed to have known her

Because of her organising we have had well known poets come and give us workshops, have had a residency in Annamakerrig for the past five or six years and have been invited to be writers in residence to the National Gallery and the Hugh Lane Gallery.

She was born in South Armagh, trained and worked as a teacher in the UK and came home and raised a delightful family in Dublin.

In between she set up writing groups and classes across north Dublin.

We will miss her dearly.

I have included two of her poems from the Anthology as a tribute. I hope you enjoy them and as always comments are most welcome. Enjoy.

After a painting by Basil Bradshaw viewed at exhibition of Ulster artists, it brought back strong memories of work in hay and cornfields in South Armagh

It stretches into infinity,

on father’s chin and jowl grown

as he swung scythe to open up

a field for reaper, in

from wet stubble scratch and stab.

Each day began with

doff of cap for hasty prayer

before shoulders, arms were

I see my father’s fields starkly realised on this

I want to gather blue

cup it, gather it,

wrap it all around me

feel it, stroke it

in my hands, crush it

to my bones, melt stones with it.

stem by stem – bathe me in blue, blue,

The April sky of navy blue

who said that blue was the colour

Lovely to read your poem again about Mum. Thanks Peter

Beautiful poem about her Peter, captures her well, and beautifully delivered last Friday, I read it daily.

What a wonderful tribute to Elizabeth Peter!

She sounds like a wonderful person and I can understand the sense of loss. But she has touched your lives and so in that way lives on. Her poems are exquisite

Her word pictures indeed, how true. Yes it's a lovely tribute to a unique spirit and I think the poems are so apt. Well done. Hope to see some of you tomorrow.

Hi Peter,I am sorry to hear of the passing of your friend. I love the Blue Poem as blue is my favourite colour and her poem clearly shows the lovely spirit of your dear friend.

Peter what lovely words. You have completely nailed it there. I still can't believe that Eliza will not be part of our group anymore but I'd say she will hover around us in spirit. See you on soon