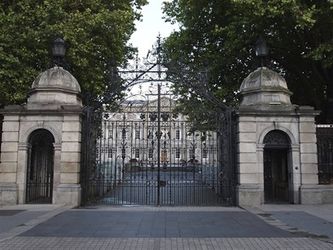 So, Golfgate. Clichéd catchphrases are emerging so fast it’s hard to keep up. But I mean, seriously, 81 of the great and good, or former great and good, being complete and utter arrogant plonkers, couldn’t happen in a Sheridan farce. My question now why is only one, the arrogant Lord Hogan, being asked to consider his position? All of those still serving in office need to be asked to go. All of those retired on public pensions ought to make a contribution to the “poor box”. I notice there is no mention of a woman anywhere, no woman would be that insensitive or thick not to understand the implication of their actions. In all my training as a professional, the framework of “modelling” was paramount as a means of learning and teaching. Does something happen people who enter through the gates of Leinster House where some part of the brains are wiped and a reprogramming happens between the gate and the front door?

I have my own share of awfulness and stupidities and blips and downright wrongful behaviour. It was always hard to come to realise and accept the consequences of my behaviour but I would get there either choosing or dragged kicking and screaming.

I don’t hear 81 regrets and I don’t believe the apologies and it couldn’t happen at a worse time for the credibility of a fragile Government. Nor do I place any meas on the whining and shouting from the opposition benches. There is no evidence of any intelligent functioning inside those Kildare Street gates. Rant completed!

I am doing a writing sequence and it happened that at this time I am confronted by the Greek gods about whom I know absolutely nothing or very little. So with a little effort, the following emerged.

Read, enjoy, share, send me some feedback to keep me somewhat honest. 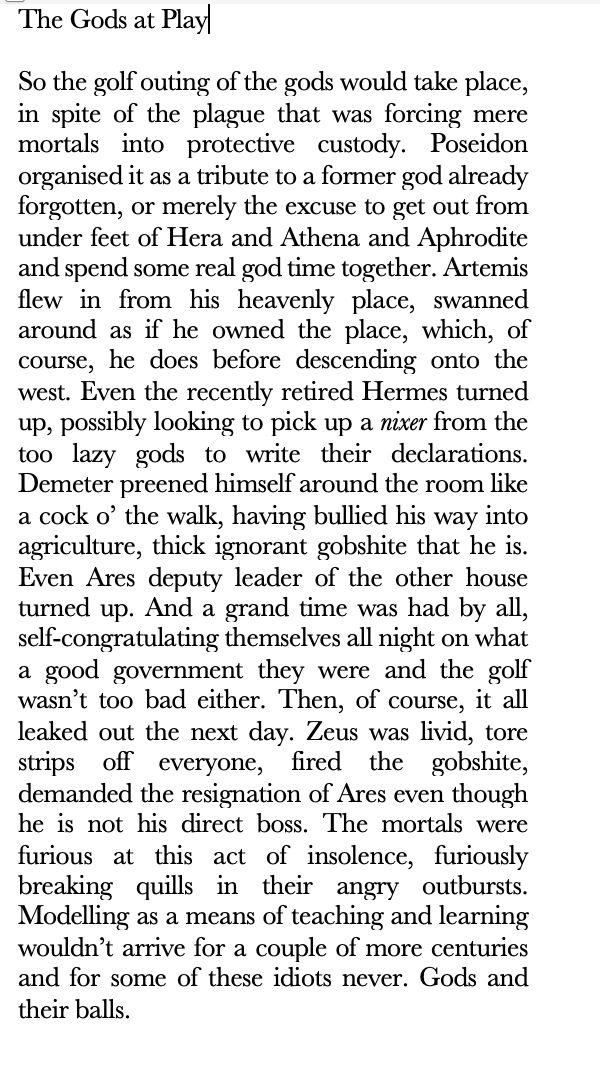 My good friend Leo Smyth offered this as a reposte so I feel it should be included- - ah, for God’s sake, it was only a game of golf. I mean what’s a game of golf without a couple of pints and a few chips afterwards.- fuck the begrudgers, is what I say. We were socially distanced out on the course…- you were socially distanced from that ninth hole!- shag off! We nearly had to delay the dinner with the time you spent in the bunker.- didn’t make any difference, the smoked salmon was cold anyway.- the real question is, who let that prick from the Examiner in?- I thought JohnJoe was looking after security. - yeah, but he forgot about the waiters.- it’s the real waiters I’m worried about, where are they going to get their ten Euros an hour now?- cause unemployment that’s all that’ll happen.- pity all the same they didn’t keep the partition shut. Could have got away with it. - there were still ten people at the table.- not all the time, there weren’t, between going for a piss and pressing the flesh sure we were up and down like yo-yos.- that’s no way to describe us! We were only networking in the interests of the nation.- pity about Dara, though. I heard he was up all night working on that speech about your man.- I bet he was up all night the following night as well. - ah, it’s tough at the top. - aye, politics can be a cruel business. - that’s because of the fucking voters, really, when you get down to it.- don’t forget the reporters! Voters and reporters are a drain on the leadership of the country.- I suppose we’d better get on with the press release. What have you got so far?- it is as it is.- shouldn’t that be it was what it was?- that’d only confuse people, better to stick with what they know.- how about: we can learn from this, going forward….- that’s always a winner. Will you have another?- ah no, it sets a bad example to the driver if I fall asleep.Leo Smyth23rd August 2020

Yes defintely send it to the times. Only a game of golf my arse, probably an all male golf club

Excellent Peter. Great way to get to know the Greek Gods and all their foibles.

Absolutely brilliant! Send it in to the Irish Times!

I loved this piece Peter - had a great laugh. Was is it not Artemis whose resignation Zeus sought though? Hope you send it to the powers that be!!!

Peter, that is great, very clever and fun.